TRIUMPH FOR TURKINGTON AT SCORCHING SNETTERTON

YOU LOOKED BOXFRESH AGAIN THIS WEEEKEND COLIN. SUCH A SUPERB SIGHT TO SEE AFTER YOUR TROUBLES AT THE SEASON OPENER. IS THIS THE NEW BEGINNING TO YOUR SEASON YOU HAD SUGGESTED?

I felt brand new too! Arriving at Snetterton fully fit and healthy really put a spring in my step. I was looking forward to starting afresh and attacking the weekend, I’m pleased that went to plan. The hot conditions proved a real uncomfortable challenge to the drivers and teams throughout race day, but I have to say, overall I felt great! It’s key that you plan and prepare for competing in conditions like we had, we’ve been around long enough to ensure that performance levels don’t drop just because the temperatures go up!

DID THE 50 POINT HAUL COME AS A SUPRISE TO YOU?

If you’d asked me after FP2, then yes, the car was all at sea, we were really struggling to get it dialled in and balanced in the hot conditions. I had no idea what car I would have in qualifying but thankfully we made the right calls, and I was confident the pace was there to challenge for podiums on race day. After race 1, I knew the potential was there, but you can never predict anything in BTCC. With the soft tyre in play, there was always going to be a lot of movers and shakers in the races. Looking back, we executed the weekend when it mattered, fantastically. I’ll take 50 points any weekend!

WHAT WERE YOUR THOUGHTS ON THE QUALIFYING SHOOTOUT AND OPTION TYRE FEATURES?

I think the top 10 shootout is a brilliant idea, it enhances the pressure on the teams and adds further excitement for the fans. Strategy and tyre management come into play more with this format and you have to maximise each run. It definitely turns up the heat on accuracy and decision making for drivers! As for the option tyre return, it spices the races up for the viewers, as it allows for more overtaking with drivers on different strategies but you do have to try and work it to your advantage and be on the right tyre at the right time for your car.  My car liked the soft tyre, but you have to look after it.

WHAT WAS THE HIGHLIGHT OF THE WEEKEND FOR YOU?

Turning the car around from FP2 to qualifying was certainly a crucial moment and that allowed us to qualify well and set up race day on the front foot. Securing the first win of the season was obviously great but I think the highlight was just feeling back in the groove and in my happy place.  I felt sharp and fully focused.

But I have to say,  the fans stole the show!  Seeing them lining the banks was fantastic and a huge boost for the series.

LOOK BEHIND THE SCENES!

Colin and the team have less than two weeks to prepare for the next event at Brands Hatch on June 26-27. 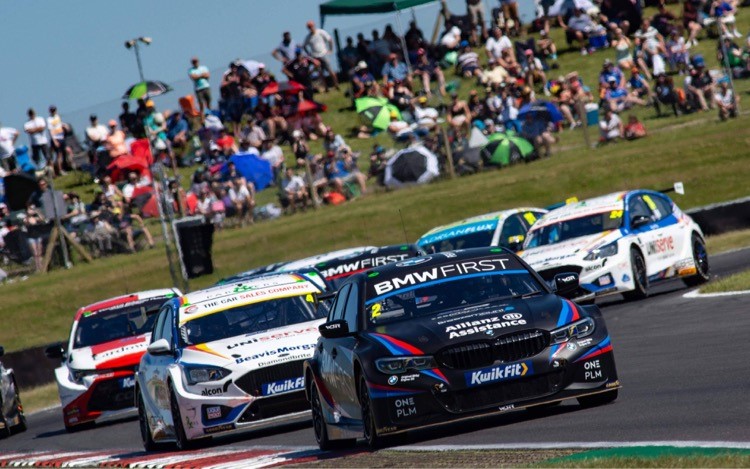 TRIUMPH FOR TURKINGTON AT SCORCHING SNETTERTON

FANS FILLED THE BANKS TO WATCH TEAM BMW’S TURKINGTON PRODUCE A CLASSIC PERFORMANCE Colin Turkington catapulted himself to within 5 points of the championship lead over the weekend with a stunning 50 point performance.Claiming pole on Saturday in qualifying, Colin went on to deliver a textbook lights to flag victory, clocking fastest lap along the […]